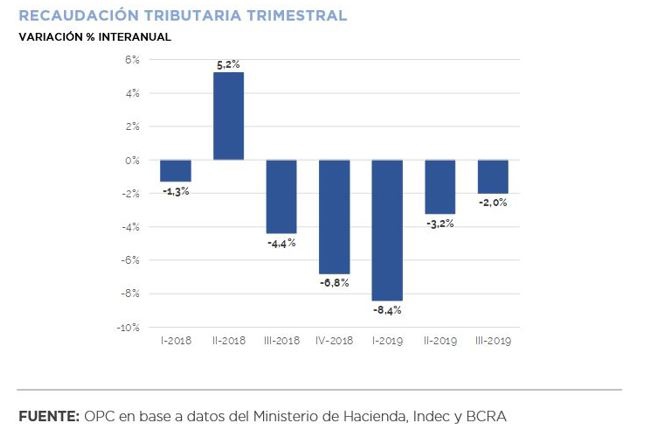 Although in nominal terms September’s tax revenue grew 42.2%, the benefits announced in August, added to the macroeconomic deterioration, caused revenue to contract by 7% in real terms compared to the same month of the previous year.

The measures announced by the government last month resulted in an estimated revenue loss of AR$31.22 billion during September. Without these measures, the decrease in tax revenues in the ninth month of the year would only have been 0.1%.

The reduction of Personal Contributions was the main cause of the decline in Social Security resources, which reached 25.9%, equivalent to about AR$10 billion: Social Security is losing relative weight in the fiscal structure due to stimulus measures and the deterioration of the labor market.

The fall during September in main taxes such as VAT -which decreased by AR$6 billion due to the exclusion of taxation on certain food products-, Income Tax, and Social Security Contributions, is likely to continue in October, since the conditions that depress collection will persist: fiscal stimulus measures and economic deterioration.

Due to the large number of Foreign Sales Affidavits and, to a lesser extent, the improvement in the exchange rate, Export Duties rose 58.7% year-on-year. However, there was no increase in revenue measured in dollars.