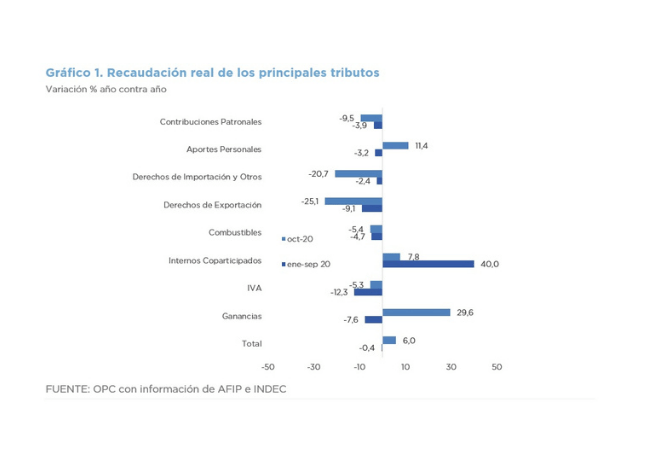 National tax revenue showed a real increase of 6% in October, the second increase recorded so far this year, partly due to adjustments in the tax deadline calendar and the relaxation of social isolation; and the lower comparison base against October 2019.

Total revenues totaled AR$642.1 billion, which implied a nominal growth of 43.9% year on year. This growth in revenue is explained by the gradual increase in the level of activity but mainly by the collection of the second installment of the payment facilities for Income Tax and Wealth Tax, which this year operated in August.

The revenue from the first income tax levied on transactions subject to PAIS tax also had a positive impact.
In absolute terms, the taxes that most contributed to the nominal increase in revenue were Income Tax (31%), Value Added Tax (21.3%), Wealth Tax (17%) and Social Security resources (15.7%). PAIS Tax decreased its share due to greater restrictions applicable to taxable transactions. For this reason, it contributed only AR$8.5 billion.