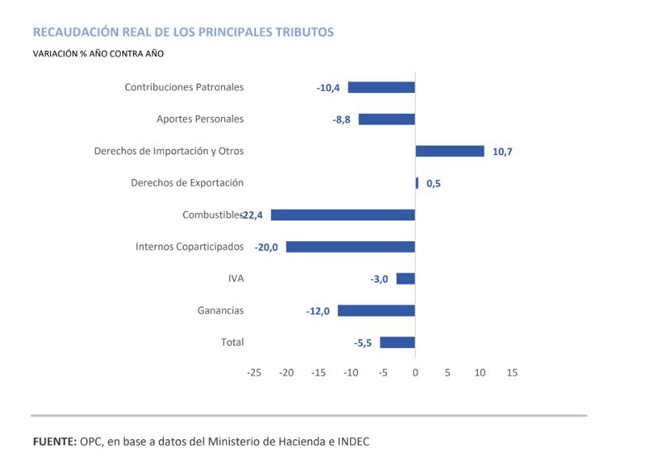 Tax revenue reached AR$527.28 billion in January, thus recording a nominal increase of 44.9% year on year (YoY) but a drop in real terms of 5.5%, the sharpest since September last year.

A major novelty was the implementation of the PAIS Tax, which contributed AR$3.18 billion, equivalent to 1.9% of the year-on-year growth of the total tax revenue. According to AFIP (Federal Administration of Public Revenue), this amount reflected transactions carried out between December 23, 2019 and the third week of January. At the official exchange rate in effect at the time, the new tax would have levied transactions for a total of approximately USD177 million.

There was also a decline in Export Duties, which in the last year were the main tax revenue. This occurred because many exporters advanced their transactions at the end of last year, anticipating that there would be regulatory reforms.

Despite the jump in the exchange rate throughout 2019, the fact that in most cases the duty rate was a fixed amount caused a significant loss in real terms.

During the first month of the year, most of the main taxes suffered a real drop. Fuel Taxes fell by 22.4% YoY, Income Tax fell by 12% YoY, VAT revenues fell by 3% YoY and Social Security Resources fell by 9.7%. This is the most contractive item and shows twenty-two months of decline.

VAT DGI has been down for twelve months, basically due to the poor behavior of consumption since 2018.

Because of regulatory changes implemented in 2018 and the rise in the exchange rate -which increased the value of assets located abroad-, Wealth Tax increased 41.7% YoY.