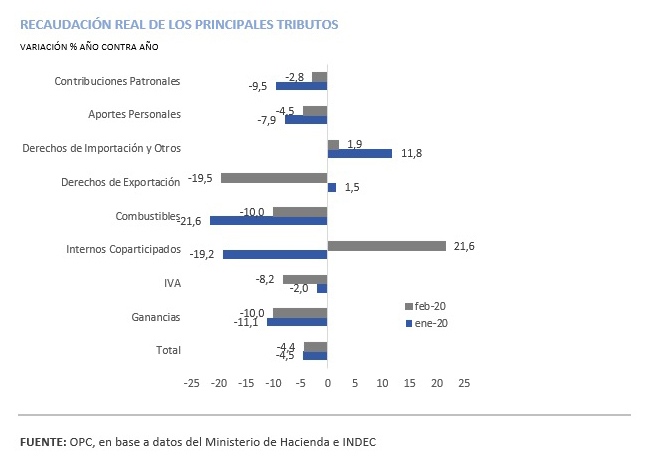 Tax revenue reached AR$471.69 billion in February, which implied a growth of 42.6% year on year (YoY). However, when adjusted for inflation, it fell by 4.4%, a performance similar to that of the previous month.

Despite last year’s exchange rate jump and the changes in the scheme of tariffs implemented in December, Export Duties grew only 19.9% year on year, the lowest increase since August 2018. This behavior is explained because exporters of the agro-industrial sector brought forward the recording of transactions to the last months of 2019, anticipating an eventual increase in the rates of this tax or eventual export quotas.

The fall in Employer Contributions slowed down due to the freezing of the amount of non-taxable income, among other regulatory changes provided for by the Social Solidarity Law, but its real fall continues to be the main contraction factor in tax revenue.

The increase in the Internal Tax rate on automobiles, provided for by the same law, boosted the collection of this tax by 21.6% in real terms.

Revenue from Fuel Taxes fell 10% in the second month of 2020 because of the partial freezing of fixed rates decided by the Executive Power, and the VAT DGI recorded its thirteenth consecutive month of decline, in line with the fall in consumption.

The PAÍS tax generated resources for AR$7.53 billion in February and reached a total of AR$10.71 billion during the year. This amount accounts for 1.1% of total revenue of the first two months of the year and 3.5% of the year-on-year growth in revenue for the same term.