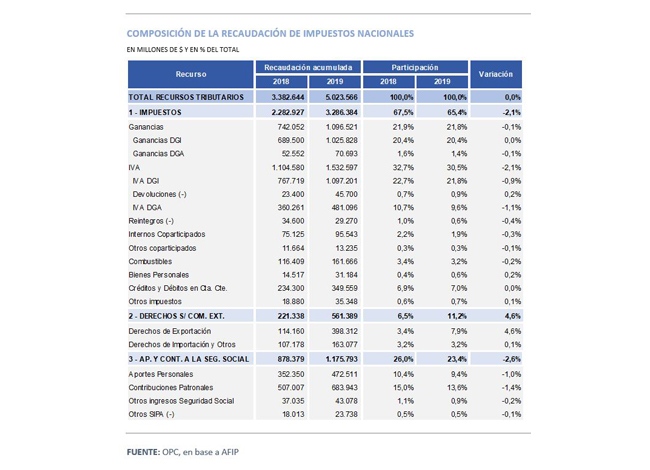 Driven by the increase in Export Duties, tax revenue in December totaled AR$492.36 billion, which implied a nominal growth of 53.9% and a real growth of 0.8% year on year.

Tax revenue growth in the last month of the year was due to the higher sales reported by the soybean sector, which, fearing the imposition of quotas for sales abroad, rushed transactions: withholding taxation rose 161.7%, repeating a phenomenon that had been recorded since October.

Social Security resources, which due to the loss of wages against inflation were the main contractionary factor throughout the year, declined in real terms by 3.9% in December and 13.1% during 2019.

Towards the end of the year, a recovery of the wage bill began to be seen, which, however, lost 8 percentage points throughout the year.

In annual terms, tax revenue fell 3.6% in real terms, with the exceptions of Export Duties and Wealth Tax.

National tax revenues once again increased their burden on international trade and goods and services, to the detriment of income and property taxes, a situation that will be reinforced during 2020 after the approval of the Solidarity Law last December.