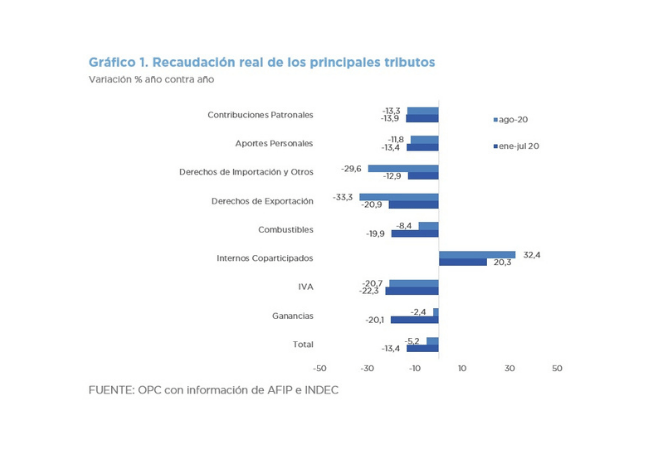 National tax revenue reached AR$612.14 billion in August, which implied a nominal growth of 33.5% year on year (YoY), but a contraction in real terms of 5.2%. This fall was the most moderate since February.

The slowdown in the decline in tax revenue can be explained by the gradual increase in the level of activity due to the partial relaxation of the restrictions imposed in the context of the COVID-19 pandemic. In addition, balances of Income Tax for Individuals and Wealth Tax,
whose original maturity in June was extended to August, were collected. The first advance payment for the year 2020 of the Income Tax for Individuals and Wealth Tax was also collected. PAIS tax reached a collection record, mainly driven by the purchase of foreign currency for hoarding purposes.

The uneven evolution of taxes throughout the year has generated a change in the composition of tax revenue, with a lower weight of the three most important taxes (VAT, Income Tax and Social Security) and an advance of taxes such as Wealth Tax, Co-participated Internal Revenue and PAIS Tax.

Likewise, it is estimated that the resources allocated to the National Administration fell in the first 8 months of the year by 13.6% YoY in real terms, those of Other Non-Financial Public Sector Entities by 16.8% YoY and those of the provinces by 11.5% YoY.