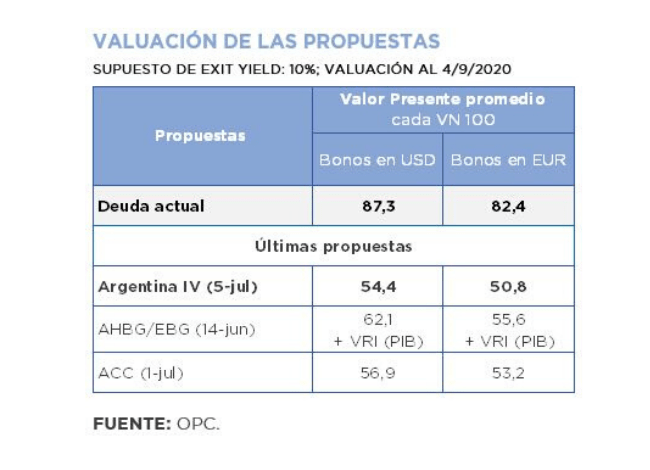 Argentine government announced an improvement in the terms and conditions of its proposal to restructure bonds issued under foreign legislation, whose acceptance deadline is August 4.

The new proposal has an estimated average value of USD54.4 for dollar bonds, about USD14 higher than the original offer, assuming an exit yield of 10%. The latest proposals from creditors are between USD57 and USD62.

Compared to the original offer submitted on April 22, reductions on principal are lowered, interest accrual is brought forward, coupon rates are increased, and the average life is reduced. The new proposal involves amortization and interest payments of approximately USD4 billion in the term 2020-2024 and USD42.4 billion in 2020-2030.

In addition, the original indentures of the eligible securities are maintained, and accrued interest is recognized through the delivery of a bond maturing in 2030. Despite the improvement of the Argentine offer, there are still differences in relation to the financial and legal terms with respect to the position of the main bondholders groups, particularly the last joint proposal of the AHBG and EBG groups. For their part, the investment funds Gramercy and Fintech have publicly announced their support to the new proposal.