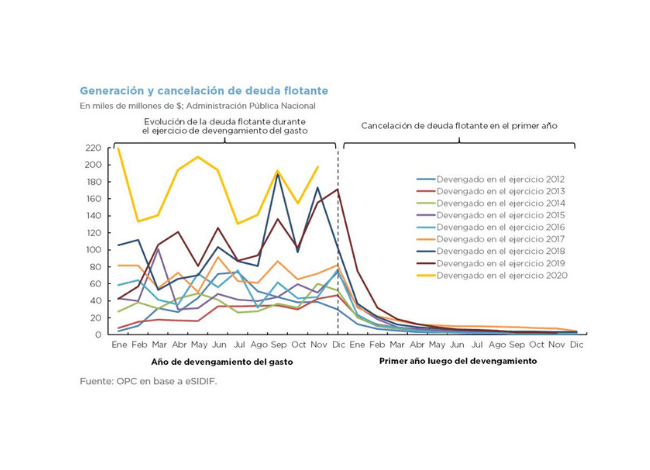 Government administration procedures in the management of spending, purchases and procurements often determine a term of duration between accrued liabilities and their effective cancellation. At any given time, accrued liabilities that have not yet been paid constitute floating debt.

Floating debt is a government liability, as far as it represents outstanding liabilities that are certain. However, under argentine regulations it is not part of public debt, which is debt instrumented through the issuance of securities and the borrowing of loans. Therefore, it is not included in public debt statistics.

Outstanding liabilities comprise those within their term of payment and those already matured (arrears) which involuntarily or intentionally were not canceled at their maturity date. Excessive accumulation of arrears has negative consequences for government operations and the functioning of the economy.

The annual volume of accrued liabilities that remained outstanding at year-end reached 6.7% of the total accrued liabilities in 2013. The ratio declined to a minimum of 3.7% in 2017, and then reversed the declining trend in recent years, reaching 4.5% in 2019. In relation to GDP, outstanding liabilities ranged between 0.7% and 1.4% of GDP since 2012. On average, 97% of the floating debt was paid during the first year following the accrual that originated it.