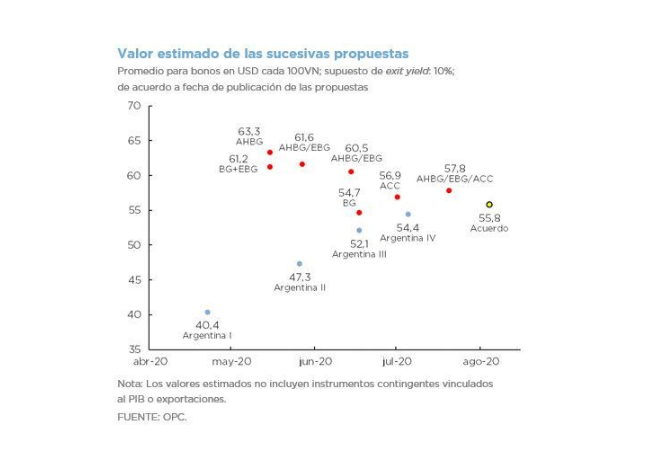 On August 4, the government announced an agreement with the main groups of creditors to restructure bonds under foreign legislation. Based on the agreement, the terms of the last offer made by Argentina on July 6 are modified.

The modifications include the advancement of some maturities of the new bonds to be delivered, new conditions for the swap for bonds in different currencies and the commitment to introduce some adjustments to the collective action clauses of the new securities that are supported by the international community.

Assuming an exit yield of 10%, the settlement has an estimated average value of USD55.8 per USD100 of eligible face value. The agreement involves an improvement of USD1.4 over the previous official proposal.

The creditor groups that negotiated the agreement, together with other bondholders that would provide support, claimed to hold 60% of the eligible bonds issued under the 2005 indenture and 51% of the 2016 indenture bonds.

According to the current schedule, the creditors have a deadline to accept the proposal until August 24 and, in case of acceptance, the swap transaction would be settled on September 4.