Analysis of the Restructuring Proposal of Public Debt under Foreign Law 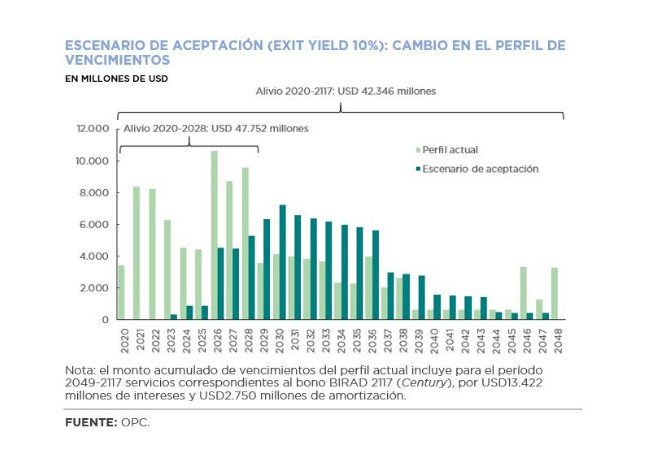 The Government submitted its proposal for the restructuring of bonds issued under foreign legislation. The swap proposal covers 21 series of bonds, issued under New York and UK legislation, and denominated in dollars, euros, and Swiss francs, totaling USD65.62 billion.

Acceptance of the offer would imply a reduction of principal of 5.4%. The stock of bonds issued under foreign legislation would be reduced by USD3.67 billion (from USD65.62 billion to USD61.95 billion).

The maturity schedule would be significantly modified, due to a combination of interest coupon reduction, grace period and maturity extension. The average maturity would increase from 5.9 to 11 years.

Throughout the bonds’ life, the interest burden would be reduced by USD38.67 billion (from USD59.67 billion to USD20.99 billion). By adding the reduction of principal, a net reduction of US$42.34 billion in total servicing would be obtained. The relief would be concentrated in the first years, accumulating USD47.75 billion in the term 2020-2028.