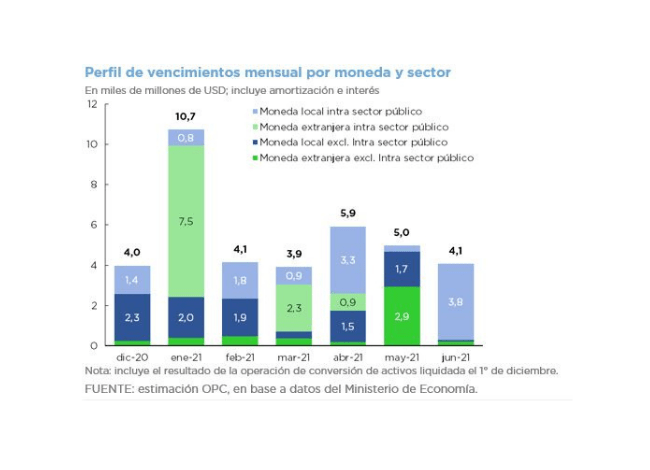 The equivalent of USD4.44 billion of principal of marketable government securities was canceled in November, of which AR$311.76 billion (USD3.87 billion) were cash payments and the rest swap transactions.

Four bonds and bills auctions were held resulting in the placement of instruments in pesos for an original face value that totaled AR$361.94 billion, and two auctions with in-kind subscription that resulted in the placement of bonds in dollars for USD750 million and securities in pesos for a total AR$179.47 billion in original face value, respectively, the latter being settled in December.

In addition, on November 25, the first acceptance period for the swap of foreign currency government securities issued under argentine law that were excluded from the restructuring completed last September, ended. A total of USD31 million (USD33 million original face value) was swapped.

During the month, interest payments for the equivalent of USD848 million were made, 56% of them in pesos. The payment of interest on fixed-rate BONTE for AR$26.27 billion (USD326 million) stands out.

Debt service maturities are estimated for the equivalent of USD3.99 billion in December, which is reduced to approximately USD2.57 billion if holdings within the public sector are excluded.