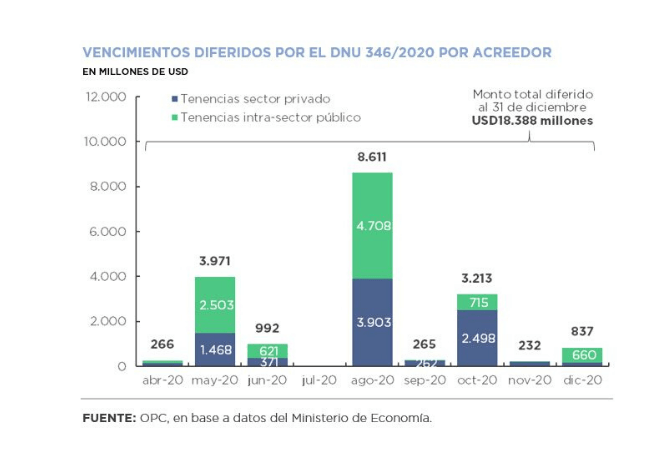 The government submitted its proposal for the restructuring of bonds issued under foreign legislation in April. The proposal covers twenty-one series of bonds totaling US$65.62 billion, eligible for swap into ten new securities (five denominated in dollars and five in euros), with annual payments, maturing in 2030, 2036, 2039, 2043, and 2047. The deadline for creditors to submit their consent, which was due on Friday, May 8, was extended to May 22.

Within the course of the negotiation, the payment of the interest coupons of the BIRAD 2021, 2026 and 2046 bonds (which are part of the bonds eligible for the swap) for a total amount of USD503 million, due on April 22, was not made. The grace period to make the payment runs until May 22, after which a default will occur.

Necessity and Urgency Decree (DNU) 346/2020 postponed to December 31 the payments of interest and amortization of public debt securities in dollars issued under domestic legislation. As a result, payments of USD18.38 billion were deferred until the end of the year, USD9.01 billion of which were held by private investors.

Six auctions were held during the month, resulting in the placement of AR$435.97 billion in securities in pesos, including AR$314.07 billion as part of a swap transaction of the BONCER TC20. In addition, financing was obtained from the Central Bank through the placement of USD171 million in Bills and Temporary Advances (TA) for AR$80 billion.