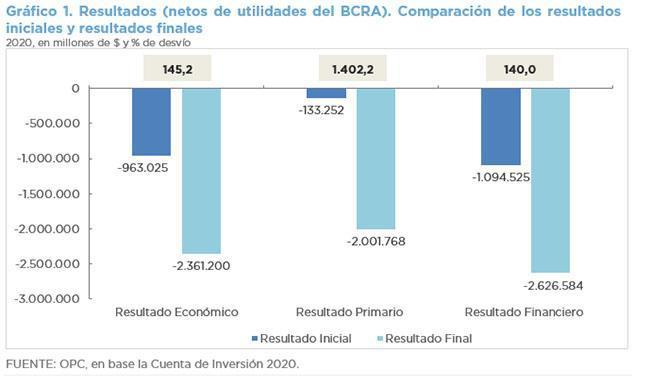 When comparing execution with the initial Budget, total revenues and total expenditures showed deviations of 50.7% and 44.1%, respectively.

Property income was the main source of the increase in current revenues, with a real positive variation of 198.1% YoY, due to the transfer of profits from the Central Bank of the Argentine Republic (BCRA) for ARS1.6 trillion. Without this transfer, total revenues would have fallen 16.6% YoY.

Primary expenditures increased by 17.1% during 2020. This variation is mainly explained by the package of measures related to COVID 19, which implied an accrued expenditure of ARS921.6 billion, without which primary expenditures would have shown a slight expansion of 0.2% YoY.

The stock of national public debt in pesos showed an increase of ARS8.9 billion during the year, largely explained by a 40.5% increase in the exchange rate. Among the debt operations, the restructuring of debt in foreign currency, both under local and foreign legislation, stood out. As a result of both operations, net debt fell by USD2.43 billion.