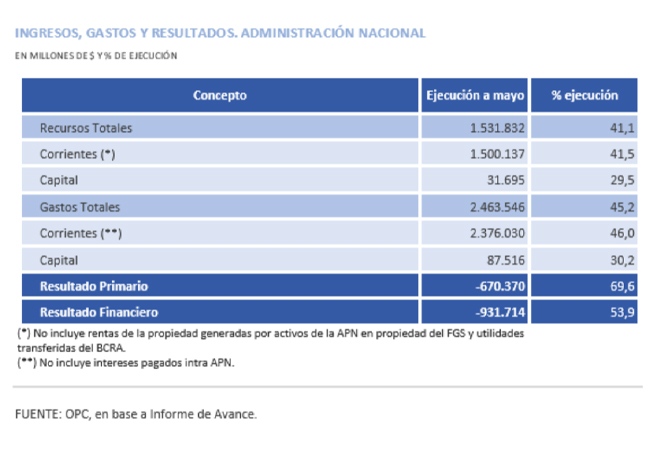 According to the Progress Report on the Draft Budget for 2021 sent by the Executive Branch to the Congress, as of May 31, the national government recorded a primary deficit of AR$670.37 billion and a financial deficit of AR$931.71 billion.

The official analysis does not include macroeconomic projections for 2021. The uncertainty caused by the pandemic, which drastically distorted budgetary expectations and whose consequences cannot yet be measured, as well as the pending closing of the debt renegotiation makes forecasting for coming years difficult.

New categories of current expenditures are included in 2020, such as the Emergency Family Income (AR$80.23 billion) and the Assistance to Labor, Employment and Production (AR$44.75 billion), both within the framework of the health emergency.

There is also a detail of the budgetary reinforcements to mitigate the effects of the health crisis which amounted to AR$537.31 billion at the end of May. OPC’s estimates, updated as of June 23, bring this amount to AR$652.06 billion.