Analysis of National Public Investment projected in the 2020 Budget Bill 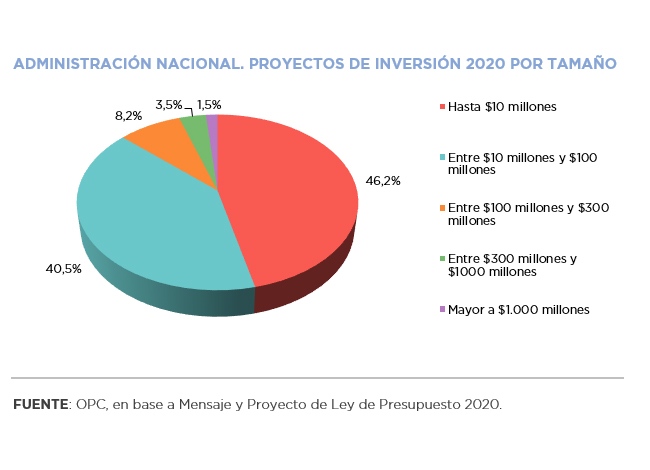 The Budget Bill submitted to Congress in September 2019 estimates a public investment amount for the national government at AR$232.21 billion, with an estimated nominal increase of 19.6% year-on-year with respect to the 2019 closing projection made by the Ministry of Finance.

Public investment of the entire National Public Sector (NPS) -including government-owned companies, trust funds and other entities- would amount to AR$318.02 billion, according to the Message 2020, which is equivalent to 4.9% of the total expenditure of the NPS. This implies a drop of 10.9% year-on-year in relation to what was projected for this year.

The largest increase is in capital transfers made by the national government to other entities or jurisdictions to carry out works or purchase goods, which increased 32.4%. Real direct investment (works projects and equipment acquisition) only increased by 6.1% YoY.

The geographical breakdown of these transfers shows a concentration in the Pampas Region, basically in the Province of Buenos Aires (18%) and in the Autonomous City of Buenos Aires (10.3%), jurisdictions in which half of the real direct investment is concentrated.

The largest amounts are allocated to railway works, such as the improvement of the Belgrano Cargas Railway, which involves several jurisdictions and would demand AR$5 billion, and to the laying of highways, including Route 19 connecting San Francisco with Córdoba or Route 8 connecting Pilar with Pergamino.

In the rest of the Public Sector, the main direct investments would be carried out by government-owned companies: Nucleoeléctrica Argentina S.A. (36.9% of the total), and Integración Energética Argentina S.A. – Ex- ENARSA (30.3%).