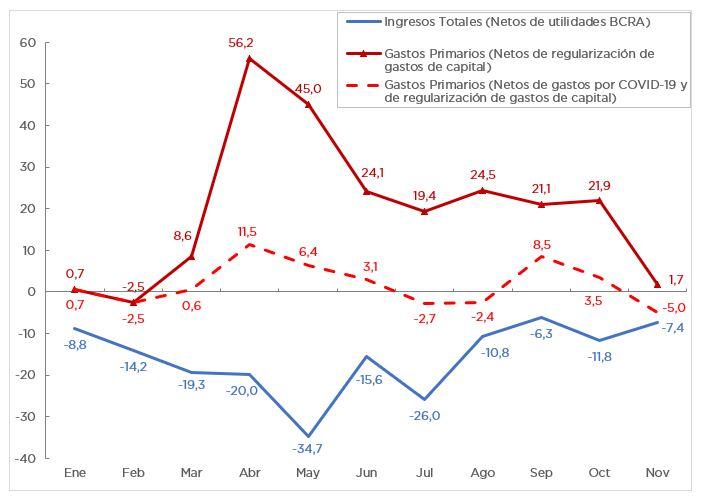 During the month of November, total revenues of the National Government showed an expansion in real terms of 27.0% year on year (YoY) because of the transfer of profits from the Central Bank of Argentina (BCRA) to the National Treasury in the amount of AR$150 billion. If these resources are excluded, total revenues would have fallen by 7.4% YoY.
Tax revenues fell 6.0% YoY, and the 31.1% YoY increase in Income Tax revenues failed to offset the drop in VAT (4.5% YoY) and Export Duties (46.0% YoY).
Primary expenditures (after adjustment of capital expenditures executed in previous years) had, for the first time since March, a variation of less than two digits (1.7% YoY).Considering debt interest (-39.6% YoY), total expenditures in November fell by 18.4% YoY.
By the end of November, AR$32.8 billion of expenditures related to COVID-19 were recorded.
The primary balance shifted from a deficit of AR$105.5 billion in November 2019 to a monthly surplus of AR$57.1 billion in November 2020. The negative financial balance decreased from AR$186.6 billion to AR$9.8 billion.
However, if exceptional revenues, such as transfer of profits from the Central Bank to the Treasury, and expenditures recorded in 2019 that belong to previous fiscal years are not included, November’s primary deficit is equivalent to AR$92.9 billion, which implies a 77.4% deterioration compared to the one recorded in the same period of 2019.
The Pensions item had a contraction of 5.2% YoY due to the decrease in the number of beneficiaries of the system and the benefit mobility policy.
Economic subsidies (AR$60 billion) had a real YoY increase of 19.6%, basically due to those related to energy.
The initial budget for the fiscal year increased by AR$2,7 trillion and 62.9% of this amount was allocated to reinforce social benefits.
Executed expenditure as of November 30 represents 80.6% of current budget appropriation.