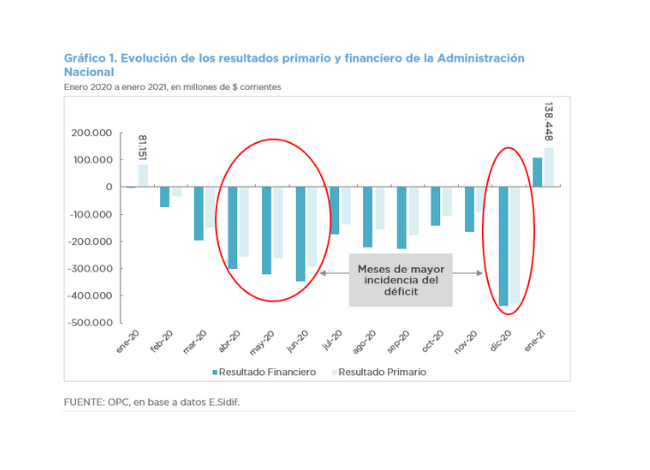 There was a real improvement in the primary and financial balances in January 2021 compared to January 2020, due to a decrease in expenditure and the restructuring of tax revenues. The financial surplus of AR$101.47 billion contrasts with the deficit of AR$3.86 billion recorded in January 2020, while the primary balance reached AR$138.45 billion, an increase of 23.5% in real terms compared to the previous year (AR$81.15 billion).

Revenues increased 3.4% year-over-year (YoY), basically because of the 25.1% YoY increase in tax revenues, which offset negative indicators in other items.

The boost was provided by Export Duties, basically because of the low basis for comparison of the previous year, as many operations had been anticipated in December 2019, resulting in lower revenues in January 2020.

Primary expenditure decreased 1.9% YoY with a mixed performance per item. The largest reductions were recorded in current transfers to provinces, pensions, and wages, with indicators of 34.0% YoY, 13.5% YoY, and 4.5% YoY, respectively.

Total expenditure accounted for 5.4% of the budget appropriations. Transfers to universities stand out for the level of expenditure execution reached (6.8%).