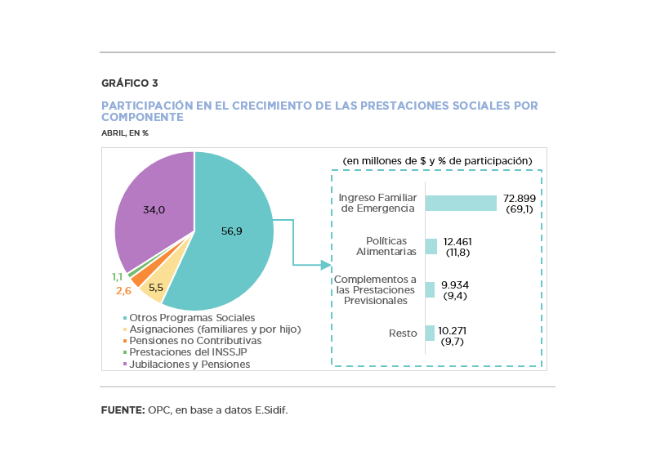 As a result of the increase in primary expenditures to mitigate the effects of the crisis caused by the pandemic and the real drop in tax resources, the primary balance (net of Central Bank’s profits) went from a surplus of AR$10.05 billion in April 2019 to a deficit of AR$263.75 billion in April 2020.

This situation is drastically mitigated by the transfer of Central Bank (BCRA) profits for AR$230 billion, which managed to offset the fall in tax revenues and Social Security resources produced by the economic paralysis caused by the Mandatory Preventive Social Isolation (ASPO). Considering the inflow of profits, the primary deficit is reduced to AR$33.75 billion.

The distinctive feature of April’s implementation was the significant increase in primary expenditures, 54.1% year on year (YoY) in real terms, because of the measures adopted by the national government within the framework of the health emergency, among which the Emergency Family Income (IFE) stands out. However, since interest on debt fell 63.1% YoY, the increase in total expenditure was less pronounced, at 26.9% YoY.

Within tax revenues (AR$171.42 billion), VAT and income tax fell by 16.1% YoY and 32.9% YoY, respectively, not only due to the economic retraction caused by the quarantine but also to regulatory matters, such as the VAT refund for food purchases and the reduction of employer contributions.

During the first four months of the year, the initial appropriation increased by AR$203.11 billion, 91.0% of the increase being concentrated in social benefits (AR$87.82 billion), in transfers to the provinces (AR$73.65 billion) and in other current expenditures (AR$32.52 billion).