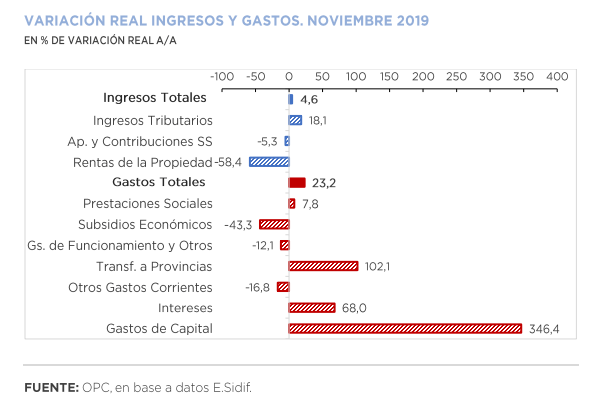 The primary balance for the month of November resulted in a deficit of AR$109.34 billion, the third month of the fiscal year with a negative outcome. Debt interest amounted to AR$124.23 billion, which had an impact on the deficit of AR$233.57 billion in the month and accumulated a disequilibrium of AR$568.49 billion in the eleven months of the current year. Even so, this figure implied a real improvement of 32.9% YoY compared to that recorded in November last year.

National government revenues increased 58.8% year-on-year (YoY), mainly explained by the growth of Export Duties (141.1% YoY in real terms), as the agro-export sector speeded up settlements due to the expectation of an increase in tax rates.

As of November 30, 82.0% of total budget was accrued, with the execution of current transfers to the provinces (86.2%) standing out. During this period, the initial budget approved for the year increased by AR$797.26 billion, which represents 19.1% of the initial appropriation. A total of 88.8% of the amendments were implemented through Necessity and Emergency Decrees, and the remaining 11.2% through Administrative Decisions.