FISCAL IMPACT OF THE DRAFT OPINION OF THE BILL ON TOURISM EMERGENCY, SUSTAINABILITY AND PRODUCTIVE REACTIVATION – NATIONAL SENATE 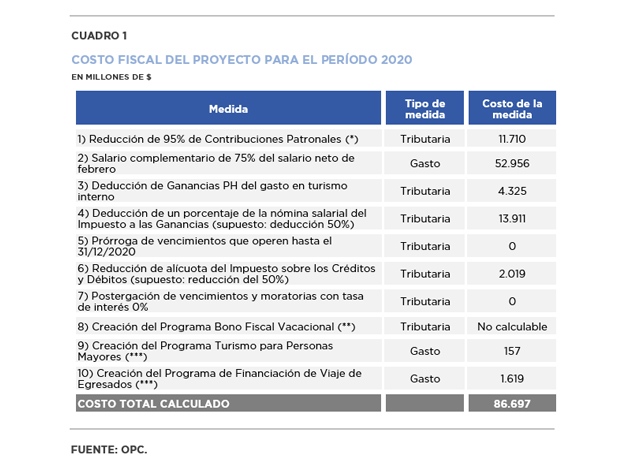 The Bill for the promotion of tourism activity, which originated in the Senate of the Nation, will have an estimated fiscal cost of AR86.7 billion, both for the higher expenditure that the national government will face and for the revenues expected to be lost between July 1 and December 31.

The estimate does not include the cost of tax deadlines extension, a measure with a financial but not economic cost.

The fiscal cost is estimated based on the 50% of the salary mass deductible from Income Tax and the reduction in the rate of the Tax on Bank Debits and Credits, a percentage that is not explicitly stated in the text.

The parliamentary initiative proposes a 180-day assistance plan for certain companies located in areas of the country that depend mainly on this activity, consisting of tax incentives and stimulus programs based on  he transfer of public funds or lower taxes.