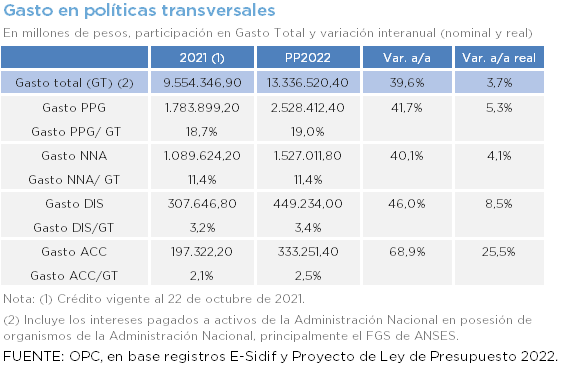 In the 2022 Budget Bill, the budgetary allocations of each cross-cutting policy show increases in real terms with respect to the appropriations for 2021, mainly direct monetary transfers, channeled through social programs.

Social programs had significant increases during the current fiscal year, both in their monetary values and in the universe of beneficiaries, but no changes in the values of these benefits over those recently granted are expected for next year.

Policies aimed at promoting a sustainable environment and combating climate change are the ones that show the greatest real growth between the current and projected budgets (25%), basically because of the allocation of resources to AySA S.A. (Argentine Water and Sanitation Company), with half of the funds allocated to this policy.

The real increase for gender equality policy is 5.3%, for children and adolescents 4.1%, and for assistance for persons with disabilities 8.5%.