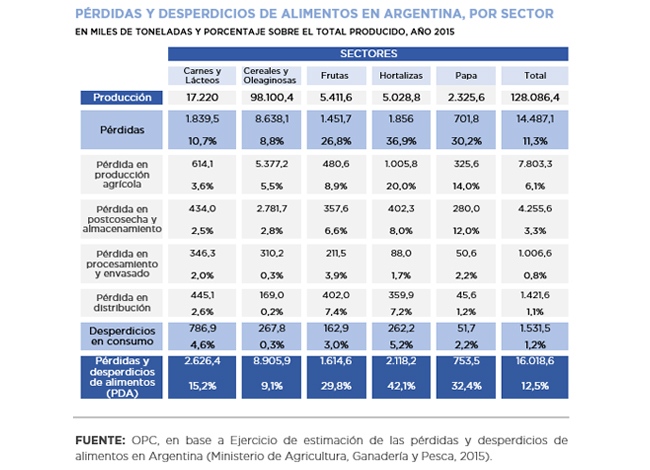 SDG 12, one of the Goals set by the United Nations to which Argentina adheres, seeks to ensure sustainable production and consumption patterns.

The country has adopted three of the eleven goals set by the UN program and the absence of methodological definitions regarding the monitoring of the reduction of food losses and waste prevents the analysis of the feasibility of the goal set. But according to a preliminary estimate with data from 2015, 16 million tons of food were lost and wasted in Argentina, from production to consumption, and the bulk of the losses were generated in the early stages of production.

According to CEAMSE, 41.5% of the metropolitan garbage is food, sometimes unconsumed. Another revealing fact of the pending tasks to achieve goals in this field is that of the 7 million tons of solid waste collected during 2018 only 12,000 have been recycled and 4,300 approximately have been composted (transformed into humus), values that indicate a setback in relation to previous years.

Direct expenditure related to SDG 12 totaled AR$790 million as of November 2019 and the accrued expenditure was 9% higher than in 2018, mainly allocated to the Program of Policies for the Increase of Productivity of Agro-industrial Chains (Ministry of Agriculture, Livestock and Fisheries). The indirect expenditure, of AR$7.16 billion, is primarily related to INTA’s research activities.