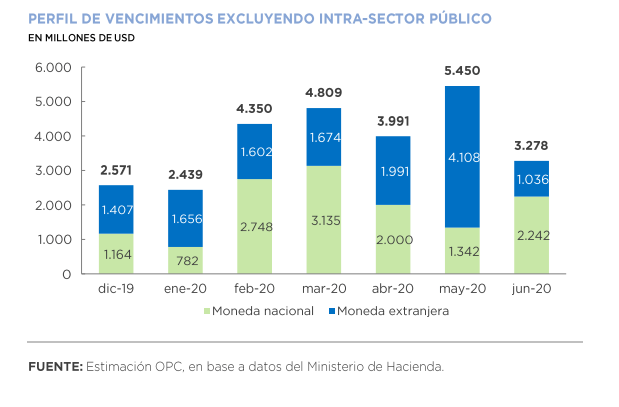 During November, interest payments totaled USD1.35 billion, of which 68% were made in foreign currency. The main disbursements were for the IMF Stand-By credit, a BONAR in dollars and the BONTE in pesos.

There were placements of securities and loan disbursements for the equivalent of USD2.11 billion, of which USD834 million were securities, placed almost entirely with different public sector entities.

Temporary advances -non-interest-bearing loans from the Central Bank to the Treasury- were made for AR$60 billion, bringing the stock of this instrument to AR$562.73 billion at the end of the month (AR$384.73 billion below the legal ceiling).

Debt maturities of approximately USD7.3 billion between amortizations (USD4.68 billion) and interest (USD2.62 billion) are to be paid in December.

The debt service maturity profile for the first half of 2020 totals USD45.23 billion. However, when excluding maturities within the public sector, estimated services for the semester are reduced to USD24.31 billion.