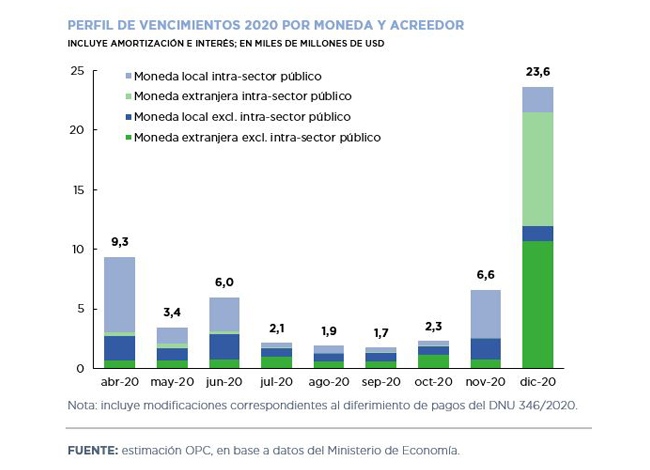 Government securities and loans for US$13 billion were placed in March, 22% of which were Central Bank Temporary Advances.

Six auctions were held, resulting in the placement of AR$550.44 billion in securities in pesos. Some of the auctions included swaps of different securities (BOGATO, DUAL, BOTAPO, LECAP, LELINK, Discount Bills).
The restructuring process of bonds issued under foreign law continues, although with delays with respect to the initial schedule.

Debt payments for USD9.34 billion (USD8.1 billion in principal and USD1.24 billion in interest), which amounts to USD57.03 billion until the end of the year, are expected to be paid in April.

The Necessity and Urgency Decree (DNU) 346/2020 deferred until the end of the year the interest payments and amortizations of foreign currency securities under Argentine legislation.

Therefore, maturities for USD18.38 billion were postponed, of which USD9.01 billion belong to securities held by the private sector.