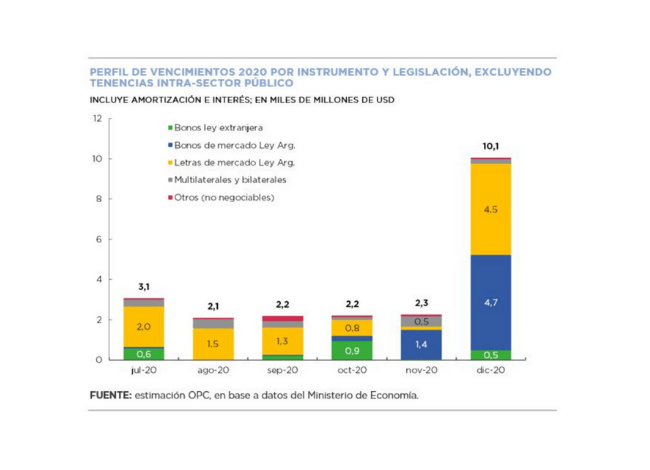 An amendment to the proposal to restructure the bonds issued under foreign legislation was formally submitted on July 7. With respect to the original offer submitted on April 22, principal reductions are lowered, interest accruals are brought forward, coupon rates are increased, the delivery of a bonus in recognition of accrued interest on eligible bonds is added, and the average life of the new bonds is reduced.

In addition, the new bonds maturing in 2038 and 2041 are issued under Indenture 2005, and a minimum participation threshold is introduced as a condition for the effectiveness of the swap. The proposal has an  stimated average value of USD54.4 for the dollar bonds, about USD14 higher than the original offer, assuming an exit yield of 10%. The latest creditor proposals are between USD57 and USD62.

In June, there were placements of securities and loan disbursements for the equivalent of USD5.1 billion, of which AR$221.95 billion (USD3.2 billion) were obtained through marketable securities auctions.

During the month, the payment of interest coupons on the BIRAD 2117 (6/28) and DISCOUNT bonds in dollars under foreign legislation (6/30), for a total of USD328 million, was defaulted.

Debt service payments for the equivalent of US$3.86 billion (US$3.07 billion excluding holdings within the public sector) are expected for July, amounting to US$40.2 billion by the end of the year.