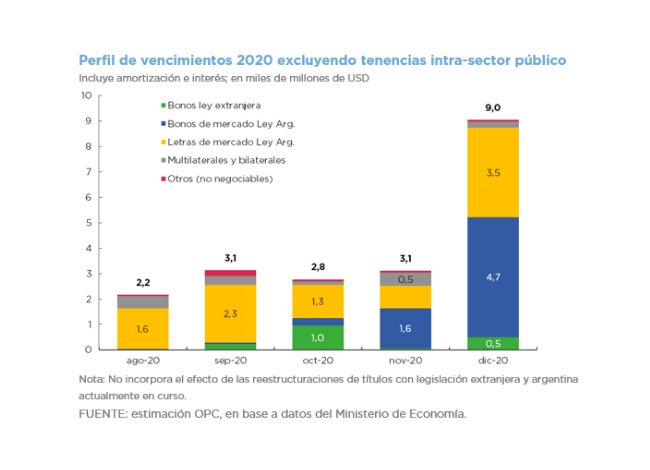 Placements of securities and loan disbursements were recorded for the equivalent of USD9.8 billion, of which AR$528.15 billion (USD7.7 billion) consisted of auctions of marketable securities in pesos.

In addition, the equivalent of USD7.37 billion of principal payment was made, mainly due to a voluntary swap of securities in dollars for new instruments in pesos carried out on July 17.

During the month, interest coupons were not paid on several foreign-legislation BIRAD bonds totaling USD584 million. As of July 31, outstanding interest coupons on bonds issued under foreign legislation totaling USD1.67 billion remain unpaid, which are expected to be recognized as part of the restructuring process of such securities currently underway.

We estimate debt service maturities for the equivalent of USD3.13 billion for August, amounting to USD35.53 billion by the end of the year (approximately USD20.29 billion excluding holdings within the public sector).

On August 4, the government announced an agreement with the main groups of creditors for the restructuring of bonds issued under foreign legislation. The deadline for creditors to accept the revised proposal was extended until August 24, while the settlement date of the transaction is September 4. At the same time, Law 27,556 on the restructuring of government bonds in dollars issued under Argentine legislation with the same conditions as the bonds under foreign legislation was enacted.