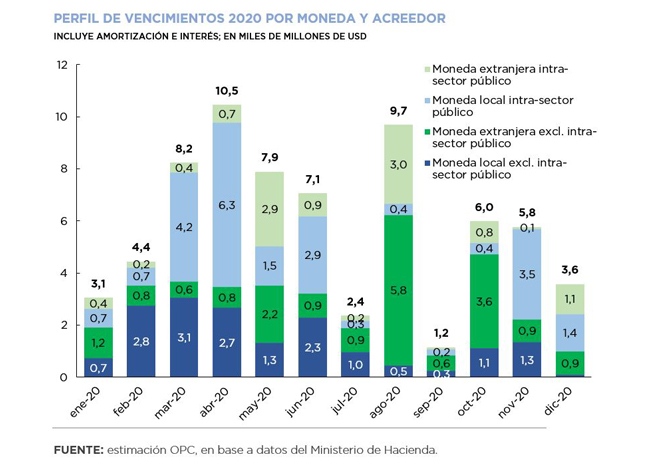 During December, placements of securities and loan disbursements were recorded for the equivalent of USD9.82 billion, of which USD4.84 billion were net transfers of Temporary Advances from the Central Bank (BCRA). For the first time since July 26, an auction of instruments in pesos was held, which resulted in the placement of Treasury bills for AR$37.01 billion.

In December, the National Executive Power ordered a new deferral of payments of Treasury bills in dollars until August 31, which implied a deferral of maturities for approximately USD7.47 billion.

In the first half of 2019, the Treasury was financed mainly through the placement of short-term bills, repo transactions with commercial banks and the disbursement of the International Monetary Fund. The worsening of financial conditions in the second half of the year implied the closing of the market and the search for financing in public sector entities.

The debt service maturity profile (principal and interest) for 2020 totals USD69.7 billion. However, excluding maturities within the public sector, estimated services are reduced to USD36.21 billion.