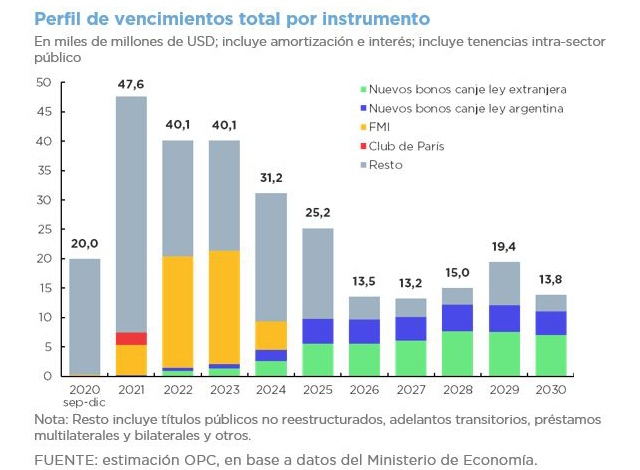 The results of the restructuring of foreign legislation bonds were announced on October 31, by
means of which 99.01% of the outstanding USD66.18 billion of all bonds involved were
swapped. The level of acceptance of the proposal among creditors was sufficient for the
implementation of the Collective Action clauses in most of the eligible bond series, except for
the Par bonds in euros and dollars issued in 2010. New bonds in dollars were issued for
USD63.2 billion and bonds in euros for EUR4.18 billion.

Subsequently, on September 4, the results of the early acceptance for the swap of government
securities in dollars issued under Argentine legislation were announced. In this stage, 98.9% of
the outstanding USD41.71 billion of eligible securities were swapped. New bonds in dollars for
USD41.72 billion and new inflation-adjustable bonds (BONCER) for AR$57.68 billion were
issued.

As a result of both swaps (securities under foreign and Argentine legislation), the debt maturity
burden (including debt within the public sector) was reduced by USD55.5 billion for the term
2020-2024.