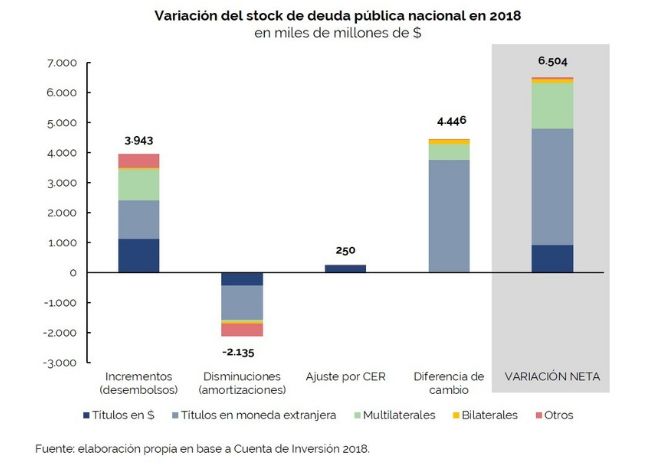 According to data recorded in the National Government Financial Report, as of December 31, 2018, the stock of national public debt totaled USD330.59 billion, accumulating an increase of USD11.3 billion throughout that year. As a proportion of Gross Domestic Product, the debt increased 29.5 percentage points (p.p.) to reach 85.8% of GDP.

Of the USD28 billion disbursed in 2018 by the International Monetary Fund, USD7.5 billion went to strengthen the Central Bank’s reserves, and the rest to budgetary financing.

Excluding the IMF, the debt incurred with international and bilateral official organizations showed a net reduction of USD873 million in 2018. This was due to the cancellation of services with the Paris Club for USD1.9 billion, partially offset by net disbursements from the World Bank, the CAF and the IDB for USD365 million, USD312 million, and USD129 million, respectively.

The national government did not make use of the authorization to issue up to AR$14 billion in treasury bills to backup fuel and electric power imports.