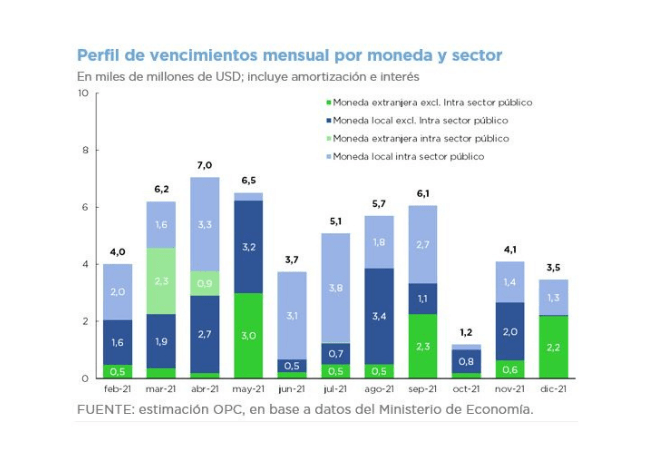 Two auctions were held in January resulting in the placement of instruments in argentine pesos for an original nominal value of AR$250.19 billion.

Marketable government securities for the equivalent of USD2.18 billion were canceled. Of that total, USD2.17 billion were cash payments (AR$189.56 billion), and the remainder were swap transactions of securities in dollars.
During the month, loan disbursements for USD35 million were received and amortizations for USD291 million were paid, mainly from bilateral loans.

Interest payments for USD434 million were made, of which 85% was in argentine pesos. Interest payment of Cuasipar and Discount in pesos adjustable by CER (Reference Stabilization Coefficient) for a total of AR$16.02 billion (approximately USD189 million) stands out.

Maturities for February are estimated at USD4.01 billion, (amortizations for USD3.55 billion and interest for USD455 million). Excluding holdings within the public sector, estimated maturities are reduced to USD2.05 billion.

For the term February-December 2021, maturities are estimated at USD53.08 billion, reduced at USD28.4 billion if maturities within public sector are excluded.